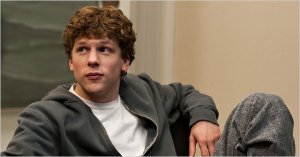 Millions of Friends, but Not Very Popular

What makes Mark Zuckerberg run? In “The Social Network,” David Fincher’s fleet, weirdly funny, exhilarating, alarming and fictionalized look at the man behind the social-media phenomenon Facebook — 500 million active users, oops, friends, and counting — Mark runs and he runs, sometimes in flip-flops and a hoodie, across Harvard Yard and straight at his first billion. Quick as a rabbit, sly as a fox, he is the geek who would be king or just Bill Gates. He’s also the smartest guy in the room, and don’t you forget it.

The first time you see Mark (Jesse Eisenberg, firing on all cylinders), he’s 19 and wearing a hoodie stamped with the word Gap, as in the clothing giant, but, you know, also not. Eyes darting, he is yammering at his girlfriend, Erica (Rooney Mara), whose backhand has grown weary. As they swat the screenwriter Aaron Sorkin’s words at each other, the two partners quickly shift from offline friends to foes, a foreshadowing of the emotional storms to come. Soon Mark is back in his dorm, pounding on his keyboard and inadvertently sowing the seeds of Facebook, first by blogging about Erica and then by taking his anger out on the rest of Harvard’s women, whose photos he downloads for cruel public sport: is she hot or not.

Although the names have remained the same, “The Social Network” is less of a biopic of the real Mr. Zuckerberg than a gloss on the boot-up, log-on, plug-in generation. You don’t learn much about him other than the headlines, beginning with Facebook’s less-than-humble start in 2003. Despite its insistently unsexy moving parts (software, algorithms), the movie is paced like a thriller, if one in which ideas, words and bank books blow up rather than cars. It’s a resonant contemporary story about the new power elite and an older, familiar narrative of ambition, except instead of discovering his authentic self, Mark builds a database, turning his life — and ours — into zeroes and ones, which is what makes it also a story about the human soul.

The price of that ambition, at least as dramatized here, is borne by those around Mark, who remains a strategic cipher throughout: a Facebook page without a profile photo. Charmless and awkward in groups larger than one, he rarely breaks into a smile and, if memory serves, never says thank you. He seems wary at some moments, coolly calculating at others: when his eyes haven’t gone dead, you can see him working all the angles. One of those angles, according to Mr. Sorkin’s script, which follows the outline of “The Accidental Billionaires,” Ben Mezrich’s book about Facebook, was one of the site’s co-founders, Eduardo Saverin (a very good Andrew Garfield), a fellow student of Mark’s as well as his first big check writer and personal chump.

Eduardo strides in early, his collar turned up against the Cambridge winter, and quickly moves in on our sympathies, which Mr. Eisenberg, guided by his supremely confident director, never does. Mr. Garfield can sometimes wilt on screen as if in surrender, but here his character merely sways, held up by an essential decency that makes Eduardo so appealing and such a contrast to the sometimes appalling Mark. (When Mr. Eisenberg makes Mark’s face go blank, the character seems scarily emptied out: it’s a subtly great, at times unsettling, performance.) Mark might be the brains in this unlikely friendship, but Eduardo is its conscience and slowly bleeding heart. Though he knows better, he hangs on even after he’s been cut loose.

The plot thickens after Erica dumps Mark, and he meets a pair of near-comically-perfect supermen, the identical twins and future Olympic rowers Tyler and Cameron Winklevoss. (An amusing Armie Hammer plays both brothers with wit and the aid of different hairstyles, special effects and a body double.) The Winklevosses emerge as unlikely objects of Mark’s interest and, much like Erica, his eventual contempt. The twins and their friend Divya Narendra (Max Minghella), have a Web site idea and need Mark’s programming help. They’ll pay (and how!), but the gig, they grandly explain, will also rehabilitate Mark’s reputation on campus after the hot/not scandal, a patronizing moment that echoes Mark’s breakup with Erica. “You’d do that for me?” he asks the twins flatly, recycling a line Erica once used on him.

The conspicuous paradox that “The Social Network” plays with is that the world’s most popular social networking Web site was created by a man with excruciatingly, almost pathologically poor, people skills. The benign view of Facebook is that it creates “a community,” a sense of intimacy, which is of course one reason it also creeps out some of its critics. As the virtual-reality visionary Jaron Lanier puts it bluntly in his manifesto “You Are Not a Gadget,” Facebook also reduces life to a database. In “The Social Network,” a character lashes out at both Mark and “the angry” who haunt the Internet, but Mr. Lanier takes the view that it’s fear that drives the idolizers of what he calls the “new strain of gadget fetishism.”

Beyond the obvious (money, sex, fame) it’s hard to know what truly pushes Mark, whose personality emerges in furtive smiles, gushes of words and painful pauses. Eventually everyone does pay: the Winklevosses, Eduardo, even Mark. The filmmakers have their ideas about who did what to whom, but they don’t try to fill in all the blanks or, worse, soften Mark’s edges with a Psych 101 back story. You see what turns him on: software, revenge and, in several lightly comic and darkly foreboding scenes, Sean Parker, the flamboyant co-creator of Napster, who’s played by Justin Timberlake as a jittery seducer. Sean oozes into Mark’s life for a piece of the action and instantly dazzles the younger man with his bad-boy ways (coke and Champagne for everyone!), sexy dates and big, brash talk of riches.

Shooting in digital and working with the cinematographer Jeff Cronenweth, Mr. Fincher turns down the lights and tamps down his visual style, deploying fewer special-effects sleights of hand than he did in “The Curious Case of Benjamin Button,” with its wizened and baby Brad Pitt, while also maintaining the familiar Fincher atmosphere of dread. Harvard has rarely been represented to such dolorous effect as in “The Social Network,” where even the colors seem leached of joy. A restrained, somber palette and the shallow depth of field express the limits of Mark’s world, while the rapid, seamless cutting among different times and spaces — scenes of him creating Facebook are woven together with scenes of him in separate depositions — evokes the speed of his success, giving the narrative terrific momentum.

Mr. Fincher pointedly abandons his smudged browns for a gauzily lighted sequence of the twins rowing at a tony British club that, with the edges of the image blurred and movements slowed, looks like a dream. This is a world of rarefied privilege in which men still wear straw boaters, and royalty blathers within earshot. Mark isn’t invited, not because he’s poor (he isn’t), but because this is a closed, self-reproducing system built on exclusivity and other entitlements, including privacy. (The movie refers to Mark’s being Jewish, and the twins look as if they crewed for the Hitler Youth, but that’s just part of the mix.) Mark doesn’t breach this citadel, he sidesteps it entirely by becoming one of the new information elite for whom data is power and who, depending on your view of the Internet, rallies the online mob behind him.

“The Social Network” takes place in the recognizable here and now, though there are moments when it has the flavor of science fiction (it would make a nice double bill with “The Matrix”) even as it evokes 19th-century narratives of ambition. (“To be young, to have a thirst for society, to be hungry for a woman,” Balzac writes in “Le Père Goriot.”) The movie opens with a couple in a crowded college bar and ends with a man alone in a room repeatedly hitting refresh on his laptop. In between, Mr. Fincher and Mr. Sorkin offer up a creation story for the digital age and something of a morality tale, one driven by desire, marked by triumph, tainted by betrayal and inspired by the new gospel: the geek shall inherit the earth.